The Shirley Ware Education Center (SWEC) has been providing education and training to community members and health care workers since its formation in 1998 by SEIU-UHW West with initial funding from the City of Oakland. SWEC integrates its work with the SEIU-UHW West & Joint Employer Education Fund (the Education Fund). From its inception through to today, SWEC raises grants from public and private foundation sources to further this purpose.

Both SWEC and the Education Fund share identical Boards, jointly governed by labor and employee representatives. Rebecca Hanson serves as Executive Director of both organizations. See our Leadership page for current Board of Trustees and staff leadership. 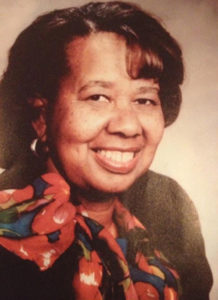 Shirley Ware was one of the first African-American women to lead a major California labor organization. She dedicated her life to the cause of helping workers and their unions, serving as Secretary-Treasurer of the Health Care Workers Union SEIU Local 250 from 1988 until her death from cancer at age 57. Born in Shreveport, Louisiana, Shirley came to California with her family at a young age and settled in Oakland. She attended Oakland’s Fremont High and Chabot Community College, where she earned certification as a Licensed Vocational Nurse. Taking a job in 1963 at an East Bay nursing home, Shirley quickly organized the facility into Local 250 and became a militant voice for fellow healthcare workers and their families. Shirley joined the staff of Local 250 in 1971, assuming a pioneering position as the first African-American woman field representative in the union’s history. Through the 1970’s and ’80’s, she represented workers in all facets of the healthcare industry, including Kaiser, nursing homes and hospitals, clinics and public hospitals.

Shirley rose to her top elected position in 1988 as part of the new Leadership Team of Local 250. As Secretary-Treasurer for 10 years, Shirley guided the union to financial health, managed a multi-million dollar budget and helped direct a staff of more than 100. She had a special talent for mentoring members, new and old, about the rich history and critical importance of unions. Shirley was an extraordinary teacher and a great woman who gave all she came in contact with the inspiration to change things for the better. Her memory is forever etched in the hearts and minds of all who knew her and her spirit lives on through the work of SWEC.

In July of 2020, SWEC was awarded $173,790 to support the development of trainings for 45 trainees in high skill imaging (IR, MRI and CT) and Vision Services Associates positions through Kaiser Permanente in Southern California. This represents our first ETP contract, and is a key opportunity to leverage a previously untapped public funding source to support our career advancement training.

$1 million over three years, beginning July 2020, under the James Irvine Foundation Better Careers Initiative, an exciting statewide program aims to help low-income job seekers secure middle-wage jobs with opportunities for advancement through improving training opportunities, identifying successful job placement models and diversifying California’s pool of talented workers. In addition to the financial support, SWEC will be connected to technical assistance and a multi-industry network of grantees who are doing similar work and sharing best practices. We will use the grant funds to contribute to our existing programming – specifically by supporting on-call workers in accessing tuition support programs, increasing access to our online education offerings, and COVID-19 upskilling and self-care training.

$45,000 to support staffing needs in anticipation of a COVID-19 patient surge in Alameda County, including onboarding new hire Respiratory Therapists in addition to providing Basic Life Support, Advanced Cardiovascular Life Support and Traumatic Nursing Core Course certifications to incumbent workers who are on the front lines of the response to the pandemic.

$50,000 emergency funding through H-CAP to support training responses to COVID-19, including activities to assist our learners moving online, pandemic-specific training and training to help workers develop new skills that will likely be needed to limit the spread of COVID-19.

$462,300 over 4 years, beginning In September 2019 as part of joint application on behalf of all participating SEIU and AFSCME Education Funds, submitted by the Healthcare Career Advancement Program (H-CAP) to support the cost of executing apprenticeship programming.

$50,000 collaboration with Worksystems, Inc. to improve the patient experience and health outcomes of underrepresented populations by supporting cohorts of non-clinical workers moving into clinical roles.